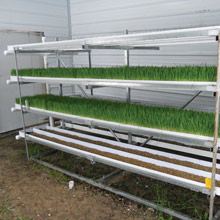 Samuel Hershberger raises and trains Standardbred horses on his farm in Holton, Michigan. As a member of an Amish community, his horses are an integral part of transportation and farm labor for his family and neighbors.In order to keep his horses in good condition, they require a nutritious diet that supports their heavy workload. To meet the needs of his horses, he was feeding large amounts of grain supplemented with vitamins, minerals and alfalfa hay.

A farrier by trade, Hershberger recognized the potential problems that could occur with his horses on a diet heavy in grain and wanted to be able to provide them with fresh greens for at least some of the year. However, he was limited by his land. Living on ten sandy acres, he is unable to grow enough pasture to incorporate into his horses' diet. He says, "I have a hard time growing grass even in the summertime when it's warm because of the soil quality. My horses have never even seen green grass."

Since starting his horses on fodder, he has been surprised by the benefits it has provided. He explains, "The health benefits really shocked me. I didn't expect to see such drastic improvements. My horses' energy levels have really increased and they also keep their weight conditions easier." He has one broodmare in particular that really benefited from the diet change. Hershberger says, "I have a mare that is 17 and she has never been able to keep up her body condition. When I put her on fodder sprouts, her ribs filled out and her health greatly improved."

Hershberger is also pleased with how his horses have taken to the fodder. He explains, "I haven't had a horse yet that wouldn't eat it. My horses will turn away from second cutting alfalfa hay to go eat the fodder." With all of the benefits Hershberger has seen and the cost savings that he has experienced, he says about fodder, "It is definitely the way to go."