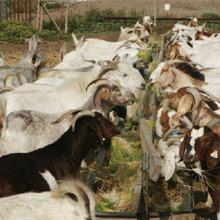 Raising goats can be both challenging and rewarding, according to Neal Amsberry, owner of Broke Richard Ranch, especially when you're in charge of more than 250 head of goats. One challenge Amsberry can do without, however, is the high price of feed. When the 2011 drought that started in Texas began working its way north that winter, Amsberry could see the stress on his alfalfa fields by spring 2012. He says, "We had irrigated and spent a lot of money on water to get a crop. After deciding that the yield would still not be sufficient to sustain the number of goats we needed to remain profitable, I began looking at fodder systems."

Already familiar with hydroponic fodder production taking place in Australia, Amsberry set to work researching companies that sold the systems and chose FarmTek's FodderPro 2.0 Feed Systems. "I went with the FodderPro 2.0 Feed Systems for two main reasons. The first is that they are affordable and the second is that I could assemble the systems myself and save a lot of money on the installation costs," he explains. He continues, "My favorite aspect of these systems is their simplicity. They are user friendly and anyone can run them."

Since purchasing his fodder systems, hay prices have risen to approximately $300 per ton, which put several small goat producers in his area out of business. The local ethanol plant where Amsberry was getting dried distillers grains for feed had also shut down because of the rising price of corn. Amsberry says, "If we didn't have the fodder systems, we would have been forced to supplement with corn this winter. Now, we have no intention of supplementing with grain at all."

He continues, "As someone in agriculture, I knew the benefits of providing a high-quality feed like fodder, with its unusually high nutrient values, would be beneficial. With the fodder, I can feed less hay, which saves fuel for grinding and time for feeding. I now feed hay every 36 hours instead of every 24 hours. I also expect to cut my hay usage by 30% to 50% since feed intake will be lower with the goats eating higher valued fodder. The goats will also now have fresh vegetation during the cold months, which they've never had before."